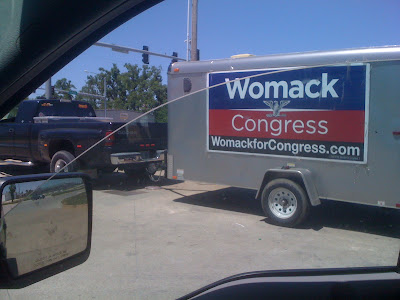 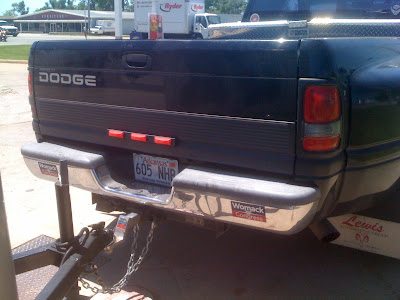 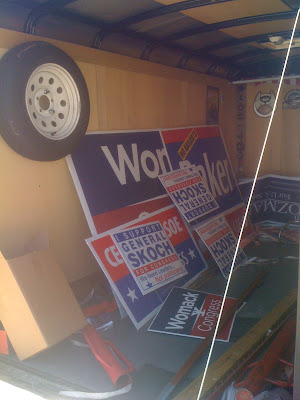 I was driving up 71 today and saw a guy in a truck putting up
signs in vacant fields and taking other signs down
today. I followed him for a little while and after several stops I took a picture, because I thought you guys might be interested in what was going on. I do not care to get in the middle of this, I just thought as a citizen it was my duty to let you know.There is a picture of his license plate, but that big trailer is pretty
easy to spot.


***************************
Facebook chatter notes that the rig in question is often parked outside the HQ of Mayor Steve Womack's Congressional Campaign HQ. The campaign says that it is a misunderstanding. Our line is open for more details....

I've always wondered what happened to campaign signs that "vanished." Well, now the mystery is solved. It was the Womack campaign!

Lewis Kaslow of Bentonville, a supporter of ... Steve's was instructed by the property owner Benny Westphal, to take down the the signs on the property that Benny said "were unauthorized and wished to have removed." Its just that simple. Nice try..

hmmmm. seems like b.w. should have called the offending campaigns, and womack should have suggested that and avoided a gray area. its just not right to have a campaign go around taking down other campaign's signs.

Maybe, but I'd be peeved if someone stuck the campaign sign of a candidate I didn't care for-- such as Womack-- on my property.

Of course you would. So would I. The question is what is the proper thing to do about it. Calling a rival campaign and asking them to take down the sign an improper response. Especially since it appears that the Womack campaign just had some issues with this in Ft. Smith.

If this annoying practice happens to you, call the OFFENDING campaign and ask them to take down their sign!

If you illegally abandon your chincey advertisement on my property, it's mine to do with what I please.

All this may have resulted in bad PR, but there was nothing wrong with what those guys did.

It's sad to see the Skoch-aholics, out of sheer desperation, making a big to-do about nothing just because their boy can't break out of single digits.

Yes, the proper response is to call the offender (or his/her representative) & ask him/her/them to take down the sign(s), not the opposition. Reqardless of whether the opposition would return the sign(s) to its/their proper owner, it's the appearance of impropriety that makes it unseemly.
But . . . I would hasten to add, the campaign should have said, we will be glad to put our signs up, but no, we will not take down signs belonging to our opponent's campaign.

Anonymous, who said they "abandoned" their "chincey" advertisement? It could have been rogue campaign volunteers, putting up signs wherever they pleased, without asking permission of the landowner. The candidate may not have known, and I would guess probably didn't.

As far as rogue volunteers-- who cares? As a property owner, I don't care how your trash came to infest my property. It is not my job to track down campaign sycophants for Bernie, Bledsoe, et al, in order to return their $2 pieces of garbage; into the dustbin it goes. And if I have someone else do it on my behalf, who gives a flying rip? Oh, that's right-- you supporters of single digit polling candidates, who have nothing substantive to discuss, so you insinuate that another candidate was orchestrating some grand conspiracy to steal campaign signs.

Two wrongs don't make a right. Yes, some of the campaigns, and Skoch in particular, are throwing up signs everywhere likely without approval of the property owner. That's wrong. It's also wrong for the campaign workers of one candidate to take down the signs of another before the election. Get ANYONE else to do it if you don't do it yourself.

My concern here is that both strident supporters of the second tier candidates and arrogant/abrasive supporters of Womack are just gonna shout insults at each other instead of asking themselves "what can WE do to make this a civil process?"

Wow, Anonymous. So, I legally abandoned my property (trash) when I left it curbside on my property this morning. But littering = illegally abandoning. What if I intentionally litter on my own property? Is that illegal or legal abandonment? Or is it abandonment at all?
I guess, then, I can take nuclear power plant waste to the city dump and that would be legal abandonment.
Following your (il)logic, putting trash into a receptacle (or city dump) is legal abandonment, even though if I had mistakenly tossed my wallet in there, and I still couldn't go looking for it later b/c it's abandoned. Similarly, a sign mistakenly erected on someone else's property is illegally abandoned and thus the sign owner can't retrieve it. Brilliant, Anon!

The vacuousness of your silly argument demonstrates you have given absolutely ZERO thought and insight into the concept of private property ownership. You shouldn't be allowed to own property.

What if I intentionally litter on my own property?

Since the definition of littering requires one person's (former) property being disposed of on another person's property, littering on one's own property would be kind of impossible, wouldn't it, sherlock?

Mark,
There wasn't a wrong on Womack's side. Where was there a wrong committed? What are you smoking, man?

Hmmm. You might ask the Mayor what HE has been smoking. He agrees with me. Here is a part of his statement on the matter....

"I apologize for the involvement of one of my campaign volunteers. It was truly an error in judgment—no malice intended. I have enjoyed this campaign—even despite the ups and downs—and look forward to seeing each of you in the coming days."

If he is a big enough man to apologize for it, his supporters should just let it go and quit insisting there was nothing wrong, that's my view. Adoration of personality to the point where we are not willing to challenge our political leaders at impropriety or even the appearance of impropriety, is dangerous.

Bear in mind I have been positive to Womack over the years and there is a fair chance I will vote for him in the run-off. But when he or his campaign make an error in judgment, I am going to report it as such. That does not make me any less his supporter when he does what is right. Woe to the politician who surrounds himself only with those who will approve anything he says or does.

Anon, there's an old saying "When you're in a hole, stop digging." You perhaps should have stopped digging with your previous post.
You did zero research and just made up a definition of littering to fit your misguided worldview.
The fact is, Arkansas law provides that YES YOU CAN litter on your own property, IF it can somehow end up on the property of others, including & especially public property. It is to prevent people from dumping garbage anywhere they want, INCLUDING ON THEIR OWN PROPERTY. You obviously have not done your homework and you seem to be the one smoking something, dude. Therefore, your grade is "F" and you are henceforth prohibited from owning property.

Arkansas law "let's me" litter on my own property? How nice of our masters in Little Rock.

Rock, you seem obsessed with telling anon that he can't own property. Do you work for the government?

No one said Arkansas law "lets" you litter on your property. Anon (mis)stated that was impossible. The law actually prohibits it if certain conditions are present.

Not obsessed, it's just that when people misstate facts & refuse to recognize the truth (i.e. close their minds), try to convince me of their falsehood(s), and to top it all off, condescendingly call me names (dimwit, sherlock), it's obvious they are not of sufficient intellect and good sense to own property.
With property ownership, like freedom, comes responsibility, including responsibility to know the law.

RTT, are you still trying beat this dead horse?

...IF it can somehow end up on the property of others

Perfectly meets my stated requirement for the definition of littering, that it involve one person's property invading another's.

But keep stretching, RTT. You obviously like to hear yourself twist "logic."

Interesting how you keep changing the language to, again, fit your misguided worldview. "Invading" does not equal "disposing of", even by your own erroneous defintion stated above. Words & concepts have meaning, but like many liberals, you constantly redefine them in feeble attempts to make your erroneous point. The key is the first element: i.e. where the discarded item is placed initially. If you place it on your own property first, and it may end up on the property of another, it's littering under Arkansas law, and thus not impossible to litter on your own property, contrary to what you stated earlier.

You could just admit your mistake, but I can plainly see any pedestrian attempts at opening your mind and educating you are hopelessly futile, so this dead horse can now go to the dog food factory.