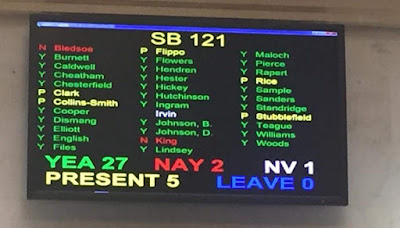 Almost all appropriation items in Arkansas outside of a few categories require a 3/4ths majority in each house of the legislature to pass. That is in the state constitution. This should have the effect of making sure the state only spends money on things for which there is broad public support. Unfortunately, it doesn't work in practice. There may be 35 Senators, but they represent only two political parties. If the leadership of both of them want something, they can normally find a way to herd enough Senators together to do it even if an idea is extremely controversial with taxpayers.
Medicaid expansion under Obamacare is very controversial. If it were put to a referendum on the November ballot, there is a good chance it would be voted down, and it is highly probably that it would be voted down in Senate Districts represented by Republicans. But legislators don't just represent their constituents, they also represent one of two parties (and the Governor runs one of those). This fact has basically short-circuited a process which was supposed to insure than the state does not spend tax dollars on most things unless they have broad public support. That is one reason why I think we should start sending independents and/or people from new grassroots parties to the state legislature, but I digress.
Ten Senators had stood their ground and refused to pass a budget which included Obamacare Medicaid expansion in it, which in this state is now called "Arkansas Works".  It was previously called "The Private Option." If people are so sold on it, one wonders why they have to keep changing what they call it? Senators were under tremendous pressure from both sides. If Governor Hutchinson wanted D.C. to send him some more money to pass out, he had to find a way to split two of the ten off and get them to vote for the appropriation.
Rumors had been circulating that not all of the ten were solid opponents of the plan. The idea was that some of them were just making a show for the folks back home. If there was some symbolic gesture they could use to flip their vote, they would.

That may have been the impetus behind the Governor's plan, which sounded too convoluted to be a plausible "House of Cards" script. By combining a bill which funded Medicaid Expansion with an amendment which ended funding of Medicaid Expansion, a couple of Senators looking for a way out could vote for the bill, arguing that the bill "defunded" the program. This was even though the Governor said in advance he intended to line-item veto the part that revoked the funding and thus leave the bill with the funding intact.

The two Senators who accepted that deal were Bart Hester and Blake Johnson. The rest did not. In one way or another they refused to fund it, whether by voting "no" or "present". You see their names above, in red and yellow. Bledsoe, Clark, Collins-Smith, Flippo, King, Rice, Stubblefield. I call them "The Magnificent Seven".  In Missy Irvin's case, she went to a funeral instead of showing up to vote so count her as a sort of "no" as well.

By flipping their vote for something that was such an obvious gimmick, Hester and Johnson put themselves in an awkward position. Sure, voting for it is bad, but putting on a big show and then flipping over such an obvious token gesture is even worse. It would have been better to have come out in favor of the bill all along than to make a big show of being against it and then abandon your position in exchange for the barest of fig leaves.

Hester made a statement to explain why he went for the deal, saying that he just could not keep voting "no" because he did not want all of Medicaid to go unfunded. But President Pro Tem Dismang had already said he was ready to separate out the "Arkansas Works" money from the rest of the DHS budget. If so, they could have had a "clean" vote on the funding of Arkansas Works without holding the rest of the people on Medicaid hostage. A lot of us see the folks on traditional Medicaid as becoming the victims of Obamacare/Arkansas Works anyway as funding for that program crowds out the Medicaid funding for them.

Hester also explained his switch by saying in effect he voted for a bill that defunded Medicaid Expansion and if the Governor comes along later and makes it into a bill which funds it instead then that's on the Governor, not him.

Look, legislators have tough jobs. I know that. They are voted into office to make some hard calls. Still, I think his statement is, by itself, an abdication of his responsibility as a legislator. The legislature is supposed to decide what is funded and what is not. That is not really what this bill does. The language in this bill was written, if what the Governor is doing is really legal, so that Medicaid Expansion can either be funded, or not funded as the Governor may decide. Sure the legislature could technically over-ride his veto with a majority, but the whole intent in the Arkansas Constitution is that a super-majority is required to appropriate state money. The legislative super-majority requirement for an appropriation is being skirted by this measure. That power was put into the Constitution to give legislators the ability to make some hard decisions, to hold out and stop spending they thought was wrong.  In this case that power, and the buck, is being passed to the Governor.

Now, there is a big caveat to all of this, for both Johnson and Hester. You see I don't think what the Governor and the legislature just did is legal, for reasons outlined here. Yes, they changed the language some, probably because they were worried about just the kind of thing I wrote about in the link, but the changes they made don't alter the fundamentals. Not that you can't count on judges to rule according to the text of the law or the constitution anymore, but they are supposed to and they have been know to do so. If it is taken to court, the Governor's action may be ruled unconstitutional. If the judges rule on the text of the state constitution it very likely will be ruled so.

What I am saying is that maybe Hester and Johnson have given the Governor enough rope to hang his Medicaid Expansion scheme. Did they mean to? I don't know, but we will see if they are at the forefront of the legal fight to show that what he did is a violation of Separation of Powers. A court ruling saying so will cast even more dubious actions at the feet of a program which already has a history of plenty. It will set things up even more for real victory on the issue in the next fiscal session. If they do it will go a long way toward showing that they were not just trying to score points or mollify some powerful supporters with a show of a fight. Instead, they are willing to fight when a fight is called for, they just had a slightly disagreement on tactics.

Look, each year that goes by the more of a burden this program is going to be, not just from the perspective of a taxpayer, or someone on traditional Medicaid getting their program cut, but even from the perspective of the state.  The state's share goes up each year. Insurers are leaving the state. Premiums are set to increase significantly in 2017. The feds will one day tire of the state taxing their Medicaid money and demand we end the practice. Each year that goes by will show more and more that The Magnificent Seven had it right, and the rest of them had it wrong. I know we have seen a lot of defeats, mostly of stubbornly clinging to old habits. Example: people insist on relying on the Republican party to vet their candidates instead of bypassing it and getting candidates of their own choosing directly onto the general election ballot. But on this one, we can win. We are on the right side of history, and fiscal reality. So we should keep doing what we are doing, only smarter.

This comment has been removed by a blog administrator.